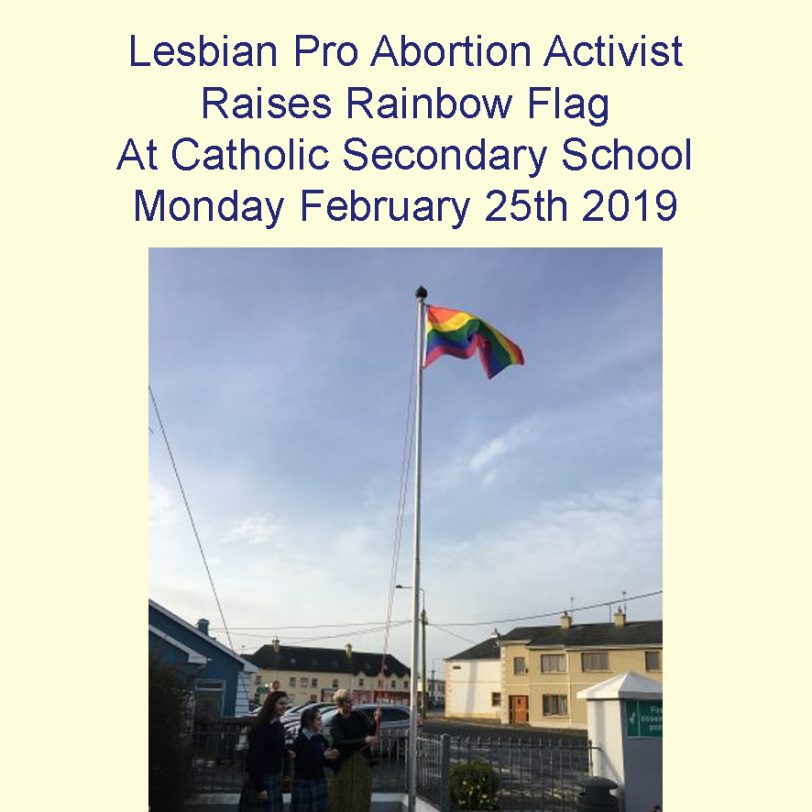 An Irish Catholic secondary school, named after Our Lady, hosted a self professed lesbian abortion activist, to raise the LGBT Rainbow flag at the school on Monday 25th February 2019.

That young children in Catholic Schools are being exposed to deceitful propaganda which contradicts Catholic teaching on human sexuality is disgraceful. That our Irish Bishops refuse to publicly condemn these public acts, which harm the innocence of children, shows us the power of the media when it comes to the public discourse.

In his book ‘Give Us Back The Bad Roads’, John Waters, former columnist with The Irish Times, has a chapter on how the ‘gay’ propaganda machine works. He quotes from a book called ‘After the Ball’ by Marshall Kirk and Hunter Madsen of America, and tells us that part of the strategy involves ‘isolating conservative Christians by presenting them as “hysterical backwoods preachers, drooling with hate to a degree that looks both comical and deranged” ‘ They also set about normalising ‘gay’ people throughout the culture. In response to the charge that they were distorting the true image of ‘gay’ people, the authors responded, “But it makes no difference that the ads are lies; not to us, because we’re using them to ethically good effect, to counter negative stereotypes that are every bit as much lies, and far more wicked ones; not to bigots, because the ads will have their effect of them whether they believe them or not.”

It is this public demonising of those who refuse to go along with the LGBT agenda that has resulted in the silence of the Irish Bishops even to the point of allowing children to be corrupted in the Catholic schools under their care. Many parents, whose children attend these Catholic schools, have also been fooled by the propaganda and fail to see the harm in it. They do not realise that the well financed LGBT lobby have used psychological manipulation techniques in order to convert them to the LGBT agenda.

In the 1995 Vatican document ‘The Truth and Meaning of Human Sexuality’ it says.

“Nonetheless, this period of childhood is not without its own significance in terms of psycho-sexual development. A growing boy or girl is learning from adult example and family experience what it means to be a woman or a man. Certainly, expressions of natural tenderness and sensitivity should not be discouraged among boys, nor should girls be excluded from vigorous physical activities. On the other hand, in some societies subjected to ideological pressures, parents should also protect themselves from an exaggerated opposition to what is defined as a “stereotyping of roles”. The real differences between the two sexes should not be ignored or minimized, and in a healthy family environment children will learn that it is natural for a certain difference to exist between the usual family and domestic roles of men and women.”

Presenting LGBT materials to children of this age distorts their image of natural human sexuality by presenting a distorted view of human sexuality to them as being normal. It ignores the sexual differences between men and women exposing children to a false idea of sexual equality where sexual complementarity is ignored as if it does not matter and as if it makes no difference.

When one considers the well-documented health hazards of the homosexual lifestyle, it is astonishing to learn that young children are being taught that this lifestyle is part of the normal sexual spectrum without any warning being given to them. That the LGBT agenda is now entering primary schools where most of the children are still in what is known as ‘the years of innocence’ stage of their development, is a cause for serious concern which seems to be ignored by most people.

Were someone to enter a classroom and expose children to the joys of smoking cigarettes or drinking alcohol without adequate health warnings, there would be a public outcry. But nobody wants to be labelled as ‘homophobic’, and so the children literally become sitting targets for LGBT propaganda as seen by the flag raising ceremony carried out on Monday 25th February in an Irish Catholic secondary school.

Catholic parents need to inform themselves of these dangers that are being presented to their children and they need to take appropriate action to protect their children from this dangerous propaganda.