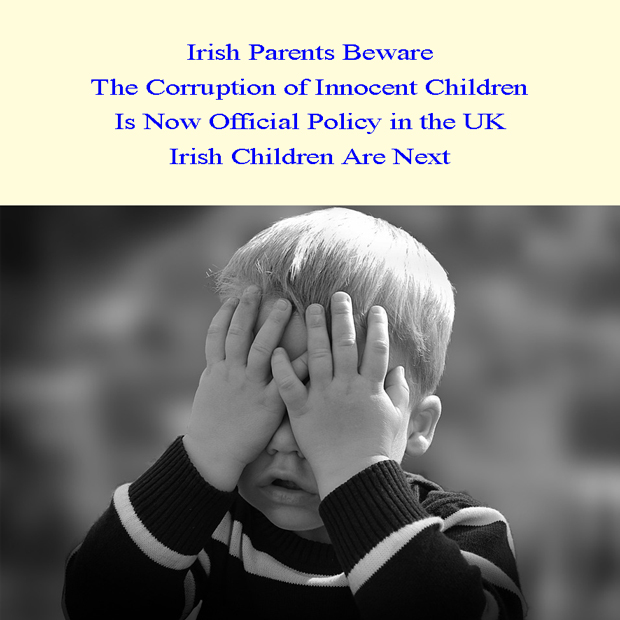 Catholic Parents in Ireland need to be aware of what is being proposed for their children, even in Catholic schools. There is a global push to sexualise children even before the age of four. One of the big international businesses behind this move is The International Planned Parenthood Federation. They have a vested interested in children becoming sexualised at an early age because they make their money from sex. They are a world leader in providing abortion, contraception, abortion pills, and treatment for sexually transmitted diseases.

They are joined in this global push by the World Health Organisation WHO and the United Nations through the various UN committees including CEDAW, the Council for the Elimination of Discrimination Against Women who are looking to make explicit sex education mandatory in all schools.

In Ireland the minister for Education, Joe McHugh recently stated that the Catholic ethos will not be allowed to interfere with the delivery of these explicit sex education classes. ” “No element [of RSE] can be omitted on the grounds of school ethos or characteristic spirit” (October 10th 2019)

One of the reasons they give for teaching children graphic details about sex education is because this information is already accessible on the internet. Once again foolish decisions are being made on account of a false ideology which refused to tackle the growing problem of internet pornography. If children are being corrupted or learning about sexual matters at too early an age from the internet, the solution is to get rid of these harmful images from the internet not to sexualise the children.

“Another very grave danger is that naturalism which nowadays invades the field of education in that most delicate matter of purity of morals. Far too common is the error of those who with dangerous assurance and under an ugly term propagate a so-called sex-education, falsely imagining they can forearm youths against the dangers of sensuality by means purely natural, such as a foolhardy initiation and precautionary instruction for all indiscriminately, even in public; and, worse still, by exposing them at an early age to the occasions, in order to accustom them, so it is argued, and as it were to harden them against such dangers”

This image comes from Year Two of the overview of the ‘All About Me’ programme, which is freely available from primary school websites in the Warwickshire school district area. Here is an example of this from a small rural school in the West Midlands, Curdworth Primary School. That these primary schools do not have a problem with putting these materials online shows just how far western society has fallen, when schools publish and teach about matters that are harmful to children in the name of child safety.

Six year old children are to be taught as follows – “children will consider their own rules for how they like to be touched by others and the rules of when it is appropriate to thouch themselves – including self-stimulation.” (Page three, All About Me -overview)

The adults who are promoting this demonic teaching to very young children are spiritually blinded and as I noted before, these kind of programmes are following the WHO guidelines which amount to a charter for paedophiles.

Catholic parents need to take appropriate action to defend their children for this gravely harmful material which disturb the child’s latency period of development.