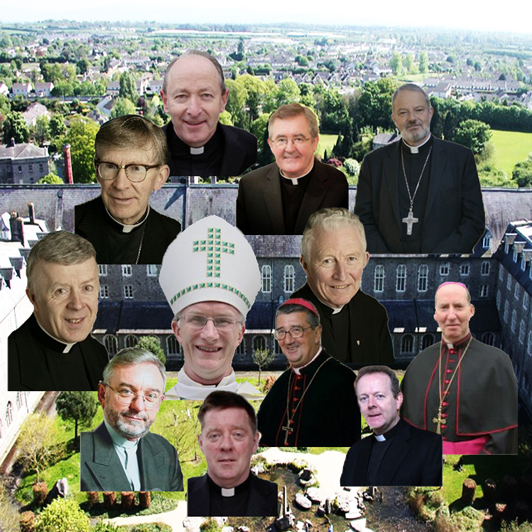 A Clarion Call To The Bishops of Ireland

Petition to the Catholic Bishops of Ireland.

VOX HIBERNIAE – THE VOICE OF THE IRISH

“It was while I was there that I saw, in a vision in the night, a man whose name was Victoricus coming as it were from Ireland with so many letters they could not be counted. He gave me one of these, and I read the beginning of the letter, Vox Hiberniae, the voice of the Irish people. While I was reading out the beginning of the letter, I thought I heard at that moment the voice of those who were beside the wood of Voclut, near the western sea. They called out as it were with one voice: “We beg you, holy boy, to come and walk again among us.” This touched my heart deeply, and I could not read any further; I woke up then. Thanks be to God, after many years the Lord granted them what they were calling for.” (Excerpt from St Patrick’s Confession)

The Lumen Fidei Institute, as an organisation of faithful Catholic laity, following on from our recent letter to each of the Irish Bishops in which we expressed our concerns for safeguarding the spiritual and temporal welfare of Irish Catholic children, on behalf of those faithful Catholics we represent, which includes parents from every diocese in Ireland, petitions each individual bishop in Ireland asking him to address the following ten points.

We believe that these matters need to be given priority by each individual Bishop in his Diocese in order to protect the faithful Catholics of Ireland and their children from spiritual, moral and in certain cases, physical harm.

We ask each Bishop, in this week when we celebrate our Patron Saint Patrick, like St Patrick, to hear the Voice of the Faithful Catholics of Ireland, calling out to you in prayer, to lead us to our Heavenly home.

It is also important that no Catholic Schools are handed over to the secular state. To do so, in the sure knowledge that the state seeks to introduce teachings which are contrary to the teachings of Jesus Christ and His Catholic Church, would be to co-operate in evil.

2 . It is important to note that there are other forms of child abuse apart from physical sexual abuse. Failure to uphold the Catholic faith by teachers; failure to give adequate formation in the faith in Catholic schools; and permitting the false LGBT agenda to be promoted in Catholic schools all constitute abuses of children that need to be stopped.

3 . Given the long running scandals within the Maynooth Seminary, epitomised by the appointment of Monsignor Michael Ledwith as president of the college in 1985, and which have continued to this day, The Lumen Fidei Institute calls on our bishops to close the Maynooth seminary. We further call on faithful bishops to found new seminaries which will give proper formation to those of our young men who wish to serve God in His Holy priesthood.

4 . The Lumen Fidei Institute, on behalf of the parents we represent, calls on the Irish Bishops to issue a firm statement regarding men with homosexual tendencies to the effect that these men will not be admitted to Irish seminaries. Where it is discovered that such men have already been inadvertently admitted to a seminary, they should be charitably asked to leave the seminary and helped to live good lives as lay Catholics. Finally, we seek an assurance that men who suffer from disordered same-sex attraction, will definitely not be ordained to the priesthood. We ask for this measure to ensure that our children and grandchildren are not exposed to the risk of child abuse that previous children were exposed to from men who had been ordained to the priesthood in spite of their same-sex attraction. The majority of sexual abuse that was perpetrated against minors in Ireland was homosexual in nature and included homosexual acts.

6 . The Lumen Fidei Institute calls on our bishops to ensure that young engaged Catholic Couples are not given a distorted teaching on marriage and family life when they attend their Catholic pre-marriage courses which are insisted upon by their Bishop. We call on the Irish Bishops to reject state funding for pre-marriage courses because such funding allows the government to exert pressure which leads to compromise. Those commissioned to give this teaching should be required to sign a declaration that they fully accept Catholic teaching on marriage and family, particularly Catholic teaching about the intrinsically evil nature of contraception.

7 . The Lumen Fidei Institute calls for the closure of the ACCORD marriage guidance and counselling service. ACCORD, by agreeing to counsel those in homosexual relationships, now encourages people to remain in sinful situations. This was agreed to as part of a requirement to secure government funding. Many ACCORD counsellors do not accept Catholic teaching on marriage and family life, particularly with regards to contraception and the same-sex lifestyle.

In place of ACCORD a new Catholic Marriage Advisory Council should be established to promote Catholic teaching on marriage and to teach couples in difficulty in their marriages that by seeking to live their married lives according to the sure teachings of the Catholic Church, and with the sacramental graces available to all validly married Catholics, that all marital problems can be resolved.

8 . The Lumen Fidei Institute calls on the Bishops of Ireland to establish a ‘directive’ pregnancy counselling service in Ireland for women who are distressed on account of being pregnant and who may consider killing their child. With the closure of CURA, whose website now directs pregnant women to pro-abortion counselling services, there is no official Catholic counselling service in Ireland from the Irish Bishop’s conference for women who are unhappily pregnant. The Irish government needs to be challenged when it insists that all pregnancy counselling must be ‘non-directive’. Such restrictions are not placed on heart surgeons, urologists, general practitioners, or others in the medical and counselling professions. These ‘non-directive’ restrictions seek to ensure that pregnant women only receive counselling from those who favour the killing of certain innocent human beings.

The CURA website should be shut down or else it should direct women to those Catholic pregnancy counselling services which seek to help women to choose life.

9 . The Lumen Fidei Institute calls on our bishops to protect our Catholic hospitals and to resist government pressure particularly in the area of abortion. We seek a clear declaration from the Irish Bishops conference that the legislation which permits the killing of innocent human beings in their mother’s wombs, will be resisted in Irish Catholic Hospitals. Contraceptive services should not be provided in Catholic Hospitals. Catholic Hospitals have been compromising on the Catholic Faith for too long. Faithful Catholics need to have assurance that they will be treated in a manner consistent with their faith if they have need to go to hospital.

Clear directives also need to be issued as regards end of life care for Catholics and in Catholic Hospitals. There is a growing trend towards withholding nutrition and even hydration from comatose patients. In this regard, the advanced care directives called ‘Think Ahead’ promoted by the Irish Hospice movement, gives people the option to opt-out of morally imperative artificial feeding.

“The administration of food and liquids, even artificially, is part of the normal treatment always due to the patient when this is not burdensome for him: their undue suspension could be real and properly so-called euthanasia”.

The Irish Hospice movement’s ‘Think Ahead’ directive is a legally binding directive which could cause great distress to Catholics whose elderly parents may have inadvertently signified that they do not want to be artificially fed and whose children will be helpless to protect their parents from these immoral directives. This matter needs to be addressed by the Irish Bishops.

10 . The Lumen Fidei Institute calls for financial transparency from our bishops. Given that the danger represented by former Cardinal Theodore McCarrick was facilitated by financial settlements which were used to silence some of his victims and were used to keep the abuse hidden, we call on all Irish dioceses to review their past financial history and to declare if there have been any private/secret financial settlements made to abuse victims on behalf of any priests or bishops who are currently in ministry. Where such settlements have been made on behalf of a priest, we call on the bishops to remove that priest from active ministry. Where payments have been made on behalf of a serving bishop, we call for the resignation of that bishop and, in the case of a failure to resign, we call for the publication of the relevant information. The same standards need to apply where there is knowledge that a private settlement has been made without the use of diocesan funds.

The Lumen Fidei Institute requests a meeting with the Irish Bishop’s Conference to discuss the content of this petition in more detail. We are also happy to meet with individual bishops for a similar discussion.

May God bless you in the most Sacred Heart of Jesus and in the Most Sorrowful Heart of His Mother Mary.

St Patrick, patron saint of Ireland, pray for us.

Our Lady, Queen of Ireland, pray for us.