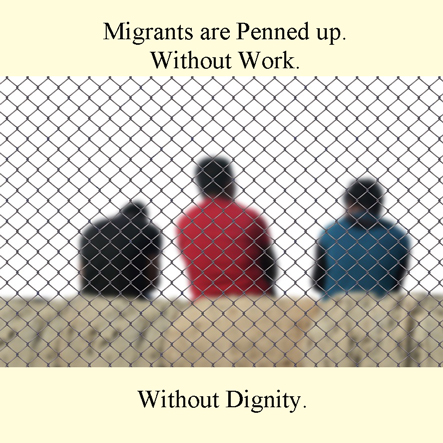 “My country has a Muslim majority. I think I know what I am talking about”

“All the migrants who arrive in Europe are penned up, without work, without dignity…. Is that what the Church wants?”

Cardinal Robert Sarah posed this question in an interview given to journalist Laurent Dandrieu on the 27th of March for the French conservative weekly magazine Valeurs Actuelle.

“The Church,” Cardinal Sarah said, “cannot cooperate with this new form of slavery that mass migration has become.   If the West continues down this disastrous road, there is a great danger that, for a lack of a replacement birth rate, Europe could disappear, invaded by foreigners, as Rome was invaded by the barbarians.  I speak as an African.  My country has a Muslim majority.  I think I know what I am talking about.”

Cardinal Sarah, not for the first time, expresses views on mass migration that differ from those of Pope Francis.  In Morocco recently, the Holy Father encouraged western countries to be open to migrants, to “those who legitimately aspire to a better life for themselves and their families” without “raising barriers”, be they religious or cultural.  Along with this openness to migrants in need, the Pope has also in the past spoke of how the Church should not “proselytise” but “attract”, in the manner of St Therese of Lisieux.

Cardinal Sarah however is concerned that Europe is now losing its identity which was of course rooted in its Christian heritage.  A continent in which Christianity is dying is simultaneously receiving millions of non-Christian, mainly Muslim, migrants, while Islam – currently enjoying a fundamentalist revival – is steadily gaining a foothold.

“If Europe disappears, and with it the inestimable values of the old continent, Islam will invade the world,” Cardinal Sarah said.  “And we will totally change our culture, anthropology  and moral vision.”

An Isolated Voice
Dandrieu comments that Cardinal Sarah is “a somewhat isolated voice in a Church that sometimes seems to have become a mere auxiliary of the pro-immigration party.”

Cardinal Sarah replied that when he visited Poland in October 2017 he urged the people “to affirm their identity as they have done for centuries.”  (Poland, along with Hungary, Czech Republic and Slovakia, is frequently criticised for its “hardline” stance on immigration.)  Cardinal Sarah continued:

“My message was simple: you are first Poles, Catholics, and only then Europeans. You must not sacrifice these first two identities on the altar of a technocratic Europe that acknowledges no fatherland.”

The Cardinal takes a broad view of European policies as regards immigration:

“The Brussels Commission thinks only of constructing a free market in the service of the major financial powers.  The European Union no longer protects the peoples [within it].  It protects the banks.  I wanted to restate for Poland its unique mission in God’s plan.  She is free to tell Europe that everyone was created by God to be put in a precise place, with its culture, its traditions and its history.  This current desire to globalise the world by getting rid of nations with their specific characteristics is sheer madness.  The Jewish people had to go into exile, but God brought them back to their country.  Christ had to flee from Herod into Egypt, but he returned to his country upon the death of Herod.  Everyone must live in his country.  Like a tree, each one has his soil, his milieu where he flourishes perfectly.  It is better to help people to flourish in their culture than to encourage them to come to a Europe that is completely decadent.  It is false exegesis to use the Word of God to improve the image of migration.  God never intended these rifts.”

“How could I not emphasise the threat posed by Islamism?”
Linking the threat of Islamism with the influx of migrants, just last week, in an interview with French publication La Nef, Cardinal Sarah had this to say:

“How could I not emphasise the threat posed by Islamism?  Muslims despise the atheistic West.  They take refuge in Islamism as a rejection of the consumer society that is offered to them as a religion.  Can the West present them the Faith in a clear way?  For that it will have to rediscover its Christian roots and identity.  To the countries of the third world, the West is held out as a paradise because it is ruled by commercial liberalism.  This encourages the flow of migrants, so tragic for the identity of peoples.  A West that denies its faith, its history, its roots and its identity is destined for contempt, for death and disappearance.”

Many Europeans, certainly the most devout, are heartbroken to see how the continent is changing.  In France, an average of three churches a day are being desecrated by people who despise Christianity.  Some people don’t notice or care.  Mainstream media blacks out such news.

When Pope Francis decries those who “build walls” and says things like, “Builders of walls, be they made of razor wire or bricks, will end up becoming prisoners of the walls they build,” there are many who interiorly feel confusion and dismay.

“The grand irony of all this is that Pope Francis lives in the only state to be surrounded by walls – Vatican City – and most of these bastions were erected to ward off ongoing Islamic invasions.”

The West will be Reborn
In fact walls were built around the Vatican in defence against Muslim attackers a full two centuries before the first Crusade was finally called for.

“Today,” says Ibrahim, “many Muslims, not just of the ISIS-variety, continue to boast that Islam will conquer Rome, the only one of five apostolic sees never to have been subjugated by jihad (unlike Antioch, Alexandria, Jerusalem and Constantinople).”

This gives us cause for sober reflection.  At the moment it looks like many parts of Europe are turning into conflict zones and Europe is besieged from within and without.  Her civilisation is under threat.  The final word, nevertheless, from Cardinal Sarah is positive:

“But I would like to point out that everything is prepared for a renewal.  I see families, monasteries, and parishes that are like oases in the middle of the desert.  It is from these oases of faith, liturgy, beauty and silence that the West will be reborn.”

Cardinal Robert Sarah is from Guinea.  He is Prefect of the Congregation for Divine Worship and the Discipline of the Sacraments.  His book “The Day is Now Far Spent” will be published on the 1st of September 2019 by Ignatius Press.