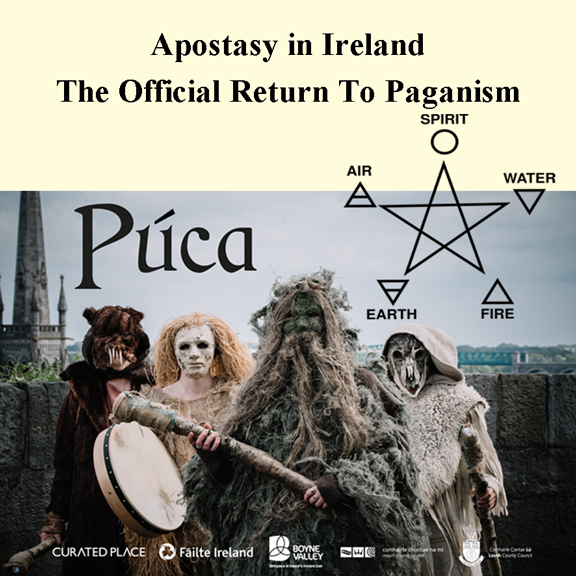 In May of this year, Ireland’s Minister of State for Tourism and Sport, Brendan Griffin, launched a new annual three day festival which is to take place from October 31st to November 2nd. One of the main centres for this festival will be Trim, in county Meath. The festival is called the Púca festival and it is hoped to bring 100,000 people to Ireland to celebrate the pagan festival of Samhain.

The history of county Meath is interesting from a Catholic viewpoint. It was in county Meath that St Patrick challenged the pagan king Laeghaire and slowly but surely brought to an end the pagan rule of the Druids. Now that Ireland has culturally apostasised from the Catholic faith with the adoption of ‘same-sex marriage’ and abortion by way of two referenda, it is not surprising that our government seeks to rekindle the old paganism in order to drive Catholicism from our country.

On the website for the Púca festival, they advertise one of the events as follows.

Arrival of the Spirits.
“Meet the original spirits of Halloween in this dramatic Festival opener as we welcome some very special Festival guests into the atmospheric surrounds of Trim Castle Keep.

The beings of Samhain reveal themselves on Halloween night with Púca leading the way, representing the change, followed by The Morrigan the dark, Boann the light, The Fear Dearg the mischief and Fionn Mac Chumaill the warding of Samhain.

Who knows what will happen on the night – or even who will appear!”

Whilst many modernists and progressives mock the existence of evil spirits and the spirit world, there is no doubt that this festival is demonic in nature and that if unchecked, it will lead to an increase in demonic activity and of people troubled by evil spirits.

But we should not be surprised that there are moves afoot to undo the great work of St Patrick in Ireland. Any government that legalises the killing of unborn children in their mother’s wombs is on the road to demon worship and further child sacrifice.

The festival seeks to invoke ancient demonic spirits all in the name of tourism and of generating revenue. Christ’s admonition that one cannot serve two masters comes to mind. Minister Brendan Griffin said;

“I’m delighted to announce Fáilte Ireland’s new festival, Púca. The Government is committed to investing in the development of new and compelling reasons for visitors to choose Ireland as a destination. I am confident that Púca is well-positioned to attract visitors from around the world to come and celebrate our ancient traditions.”

” Our market research tells us that overseas visitors are motivated to visit Ireland to attend the Púca festival. Over the next three years, we are investing €1.5million to develop Púca as a world class festival that positions Ireland as the home of Halloween internationally. We believe it has the potential to motivate 100,000 overseas visitors to come to Ireland and generate €12m in revenue for the local region.”

The spirits that they seek to invoke include the Morrigan or phantom Queen and the Fear Dearg.

The Lumen Fidei institute are hoping to organise an separate event to counter this grave evil that once more threatens our land to include the Holy Sacrifice of the Mass, a public Rosary and the public recitation of St Patrick’s Breastplate, especially the following lines.