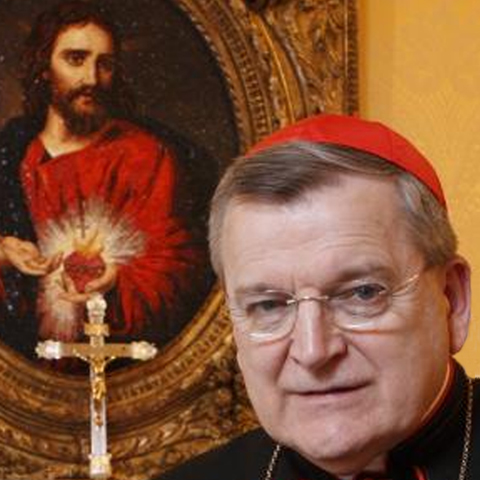 Cardinal Burke fearlessly declares the One, True Faith.
Cardinal Raymond Burke has about him an air of gentle, quietly-spoken authority that commands the respect of all whom he meets. The Declaration in which he and several brother bishops have listed some of the commonest fashionable errors of doctrine stands in a long and honourable tradition of adherence to the truth when many in high places have wavered.

Here is a summary of the Declaration:

The Faith is immutable. The Declaration begins with a reminder that one cannot make up the Faith as one goes along. No new “insights” may contradict the sense and meaning of what the Church has always taught. As St Vincent of Lerins puts it, add nothing, change nothing, omit nothing: pass on the eternal, immutable Faith that was passed to you – the Faith that was believed by all (or nearly all) of those who stood closer in time to the Lord of Life.

The Church is in but not of this world, and should not bend in conformity to it. God is not glorified first and foremost by the earthly progress of civilization, science or technology.

Outside the Church there is no salvation: No one may be saved without faith in Christ our Saviour as “perfectly God and perfectly Man”, as the Council of Chalcedon puts it. Other religions may “stretch their arms to heaven”, as Paul VI put it, but they cannot give God the same adoration as the sons of the Church give. Idolatry and pantheism are deceptions. True ecumenism intends that non-Catholics should become one with the Church. The Lord of Life prayed “that they may be one”, not that they might be many.

The grace of God has the power to overcome even serious sin. However, those who believe they can justify, as morally good, deliberate behaviours contrary to the Church’s teaching are wrong, even if kindly meant, and those who adhere to that teaching do not do wrong.

Thou shalt not kill: Suicide, euthanasia and abortion are wrong. Conception outside the womb is wrong, because it separates procreation from the conjugal act. Contraception is wrong.

Till death us do part: The sacrament of matrimony is a lifelong union of one man and one woman for the procreation and rearing of children. Sex outside marriage is wrong. Sex outside civil marriage is wrong where one or both partners is sacramentally married to a third party. Remarriage after divorce is wrong while the original spouse lives. Homosexuality is wrong, and it is wrong to imagine that God gave some people a natural sexual desire for those of the same sex. Homosexual “marriage” is wrong, even when sanctioned by civil law.

Capital punishment is permissible where it is truly necessary to preserve the existence or just order of societies.

Bread of heaven: At the words of consecration, the bread and wine cease to be bread and wine and become the body and blood of Christ truly present under the mere appearance of bread and wine. The Mass is a true sacrifice in propitiation for the living and the dead. The Holy Eucharist is not a mere spiritual sacrifice of prayers or praises, and it is not mere “spiritual food”. It is the Sacrifice of Calvary made present on our altars. Only the priest, and not the people, performs that Sacrifice, though the people unite their prayers with his.

The sacrament of Penance is the only ordinary means by which grave sins committed after Baptism may be remitted, and every instance of any grave sin must be confessed, and absolution may not be given to those who, even in only one matter, say they will not conform to Divine law. The seal of confession is not to be violated for any reason. Those in a public state of grave sin, and those who publicly deny the Faith, must not be given the Holy Eucharist.

Holy Orders: Priests are to remain celibate. Only baptised men may receive the Sacrament of Holy Orders.

The Declaration stands in a long tradition of such documents, intended to remind the Faithful that the One, True Faith, being of Divine origin, cannot by its very nature be changed from one moment to the next for the sake of what appears to be our convenience.

The Faith is eternal: and, indeed, the simplest and surest test of whether a Christian sect that claims to be true is indeed true is whether or not all the elements in the doctrine proclaimed by that sect have been altered over time. A message that has been altered is not an eternal message and does not, therefore, come from the eternal God.

St. Athanasius, faced with the Arian Heresy, wrote his own version of the Creed, which became so famous that Arianism was all but stamped out within a century.

St. John Fisher, the only English Bishop to remain true to the Faith in defiance of Henry VIII, wrote a trenchant pastoral letter to the people of Rochester in which he said: “Luther hath not one jot or tittle of warrant in Scripture for aught that he saith.” He was executed for the Faith, along with St. Thomas More.

Now Cardinal Burke and his brother bishops have done what the Holy See these days seems more than a little reluctant to do. They have listed all of the errors that the current ecclesiastical establishment seems all too ready either to condone or to ignore. And they have had the courage to call the errors errors.

There is a motive common to all these errors. We might call it well-meaning but misguided pseudo-charity. Surely, the argument runs, we should be nice to mothers who don’t want their children, or to homosexuals who want the same recognition of their “marriages” as for true marriages, or to priests who want to marry, or to people who would like to pick and choose among the Church’s doctrines?

As Cardinal Burke sternly reminds us, a wrong is a wrong whether or not the wrong is kindly intended. To be nice to mothers, the Church will find a good home for the children they do not want or cannot manage to care for; the State can make whatever financial arrangements it likes for the sake of households of every hind, but without calling those arrangements “marriage”; priests can be supported by the laity (when did you last take your parish priest for a good day out?) and encouraged to find solace in Christ their bride; and those who want to select their beliefs as though from a menu can be taught better.

Let us love them all, but let us not allow our love for them to conflict dangerously with our love for the One, True Faith of which Cardinal Burke is so doughty a defender.