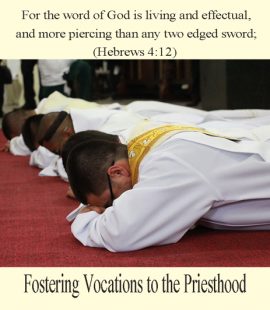 Some Insights from Irish PriestsThe bishop of Ossory, Dermot Farrell, recently made news when he predicted that the number of priests in his diocese would halve within the next ten years. It was rather surprising that this declaration reached the headlines, since the vocations crisis in Ireland is nothing new. In 1965, four hundred and twelve priests were ordained in Ireland, the highest number on record. Ever since then, the number has been falling steadily. Statistics on ordination are (unsurprisingly) … END_OF_DOCUMENT_TOKEN_TO_BE_REPLACED